How can the mantra of ‘resilient, sustainable agriculture’ be implemented in a dryland grazing context, and how can systems be truly sustainable without also being ‘restorative’?  The Gecko Community Landcare Network (CLaN) in the Goulburn Broken region of Victoria have been tackling these questions with support from the Federal Government National Landcare Program and the Goulburn Broken Catchment Management Authority – Beyond Soil Care Program.

In 2017 the Gecko CLaN Lima East trial site was established on the granitic sandy soils adjoining the Strathbogie ranges in Victoria.  The soils at the site become structurally unstable when saturated and restrictive to plant root growth in summer.  The topsoil depth is limited to the surface 10cm with low nutrient and low carbon granitic sand below this profile.

The pasture trial was established to test ‘old’ techniques such as deep ripping with a Yeomans plough and establishment of a deep-rooted tillage radish and oat crop, to reduce soil bulk density and increase soil carbon at depth.  New technologies such as remote weather stations and soil moisture capacitance probes were used to monitor changes resulting from the treatments.

Four treatments were implemented (including a Control) on 2-hectare trial plots.  The treatments consisted of:

The trial was established and monitored by a project team including representative from Agriculture Victoria, Gecko CLaN, Farm Monitoring Solutions and the land manager.  Soil moisture response to a depth of 80cm was monitored over a 12-month period following the treatments.  The 12-month period is too short to observe changes in soil carbon, so conditions suitable for soil carbon deposition (adequate soil moisture and plant root growth at depth) were identified as proxy measures to assess the merits of each treatment.

Soil moisture capacitance probes showed that following rainfall events percentage soil moisture increased to similar levels across all treatments between 0cm and 40cm and then decreased as soil moisture was utilised by pastures.  Increased rate of soil moisture draw-down was observed where deep tillage had been implemented.  In Spring and Summer daily step changes in soil moisture were observed suggesting decreases associated with pasture plant photosynthesis, therefore supporting the observations of increased plant response to deep ripping.

The field trial successfully demonstrated that ‘old’ restoration techniques such as deep ripping and crops for biological tillage can result in improved production and restorative outcomes for dryland farming areas in north-east Victoria.

The Gecko CLaN hosted a field day at the Lima East trial site on 14 September 2018.  Following a site visit the group returned to the Swanpool Memorial Hall where Brad Costin from Agriculture Victoria and Damien Gerrans the trial site land manager presented the results of the trial.  A copy of the presentation can be found here:Gecko Field Day Presentation Sept 2018

The following photographs were taken at the Lima East trial site, just prior to the site being grazed.  Strong re-establishment of Oats can be observed in Trial Plot 2 compared to Trial Plot 1.

A further field day at the site is planned for 14 September 2018. 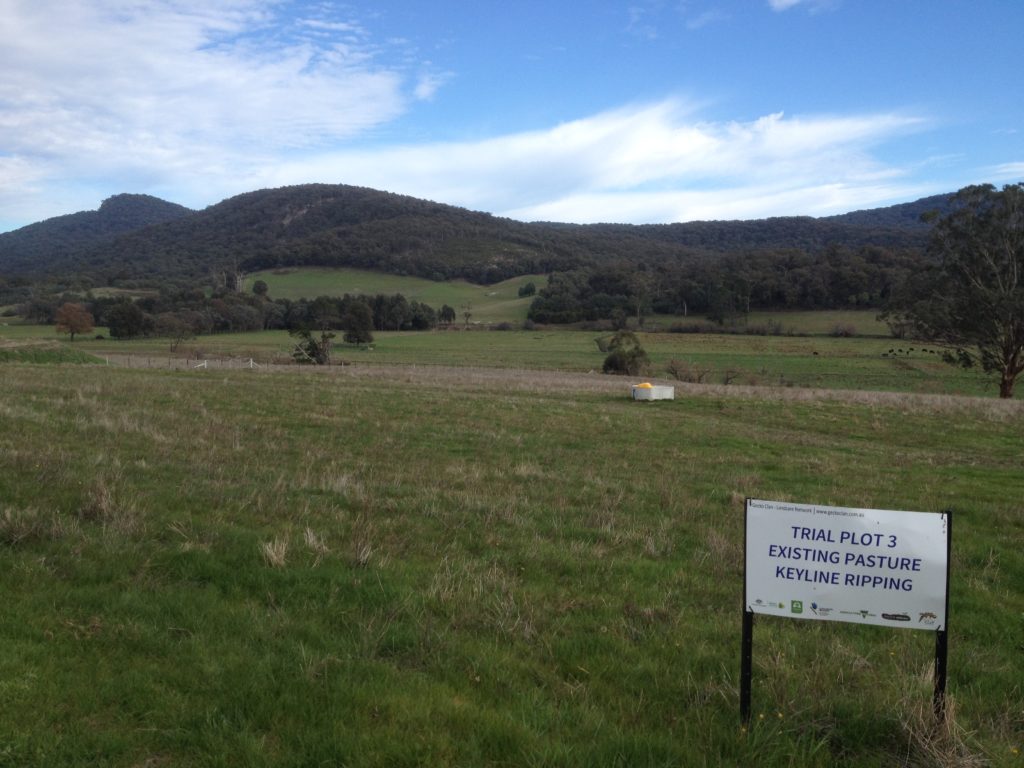 Soil moisture and temperature data continues to be collected for the site.

To see the soil moisture and temperature data over this time use the Observant login details below:

For those interested, the initial soil test report taken prior to the treatments can be found here:Soil Test Results May 2016

For further information about this project contact Kerri Robson on email: [email protected]

From the footage above it is clear that the trial plots have dried out significantly over summer.  Following the last update the site was crash grazed and the steers enjoyed the oats.  The radish had already ran to seed and were barely present for grazing.

In January 2018 the farm manager initially began mulching the remaining dry matter on site to enhance the likelihood of seed set.  Some evidence of this can be seen in the footage above.  In the end this wasn’t completed as it was determined that most of the dry matter was fallen, and further mulching may damage radish seedlings that were beginning to appear.

We are looking forward to an autumn break and the opportunity for radish and oat seed still remaining to take again.

With the warmer spring weather good growth is seen across all trial plots.  The slide show below shows the growth seen at each trail plot.

To see the soil moisture and temperature data over this time use the Observant login details below:

Further information about the soil moisture, temperature and weather data can be seen below.

Decline in soil condition in dryland extensive grazing systems contributes to the susceptibility of farms to drought and climate change effects.  Soil compaction from livestock reduces soil moisture, ground cover and increases in erosive run off.  Whilst strategic cultivation approaches (Yeomans plough, pasture aerator, contour ploughing etc) have all been used by farmers, learnings of their benefits and dis-benefits has been rarely evaluated and shared.  This project will demonstrate strategic pasture sowing unconventional species that provide quick ground cover in drought affected zones as well as report on the benefit of structural soil treatments via a Yeomans Plow.  Overall, it will demonstrate and evaluate various strategic agricultural approaches on farms and share learning to improve farmer decision making. The project will also explore the value of water planning and management in conjunction with these treatments.  The project will utilise new technologies for farms such soil moisture probes and soil temperature probes, remote weather stations and aerial drone imagery.

Project updates will be provided on this website with access to the raw data provided made available to anyone who wants to learn more about these practices. 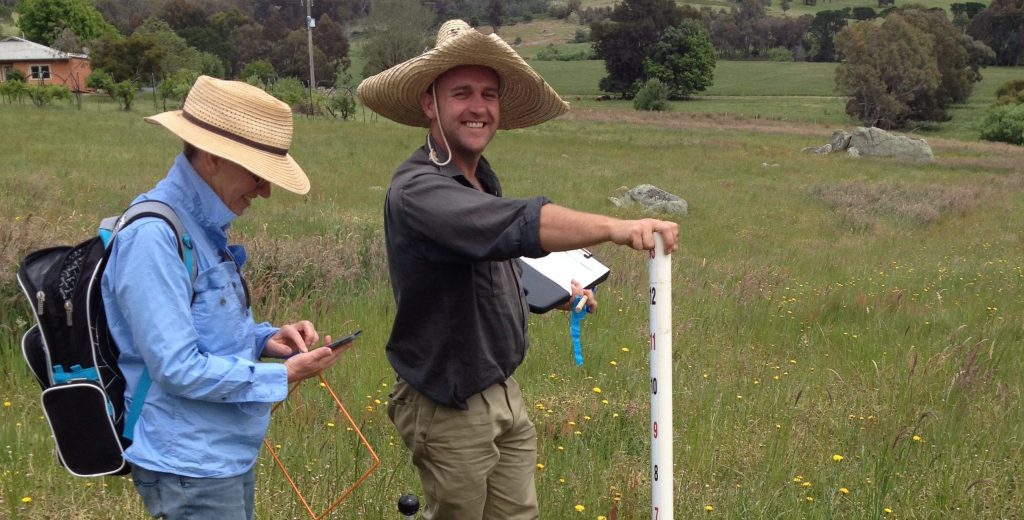 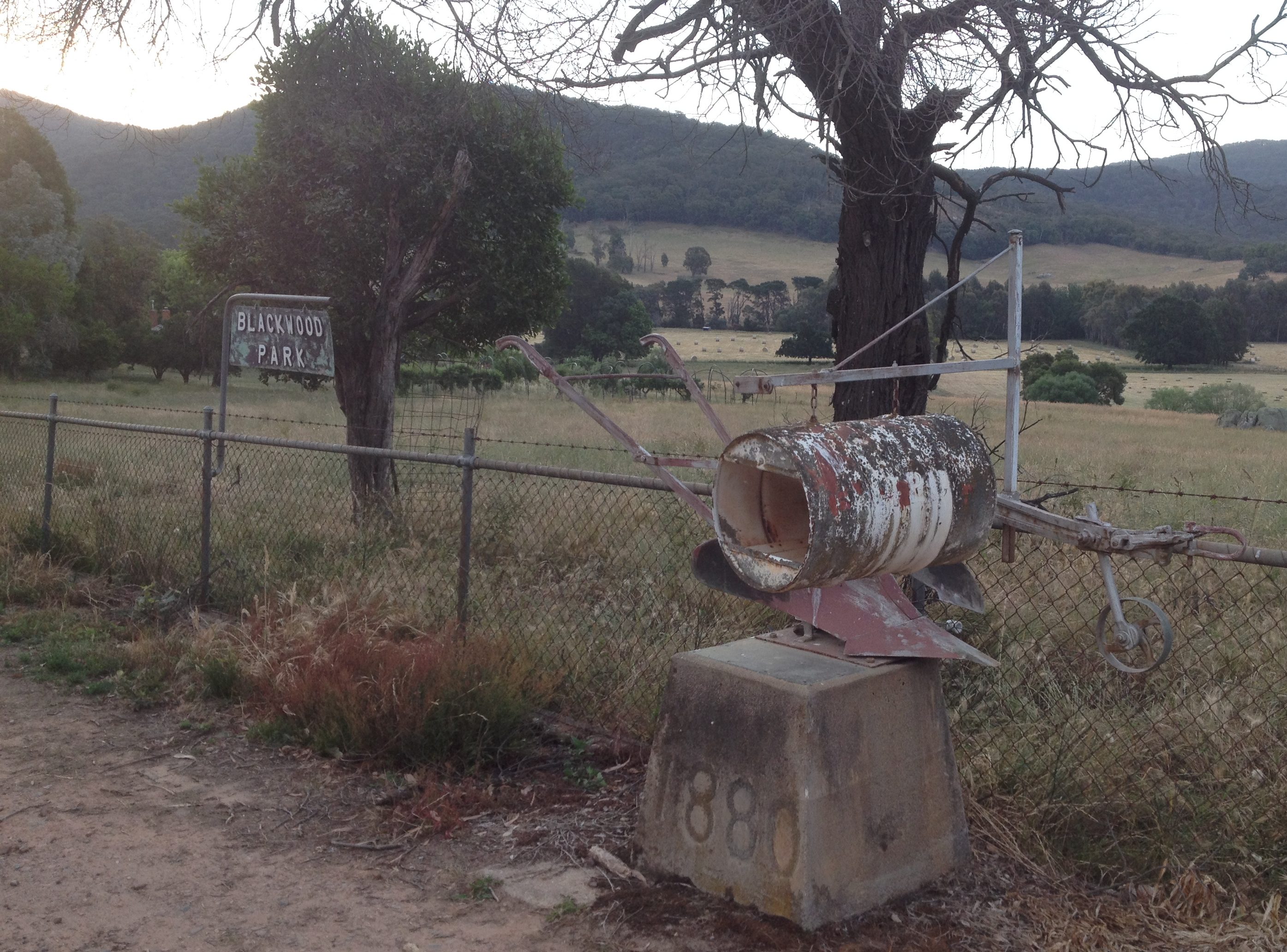 The project is being implemented on Blackwood Park in the Lima East valley. Blackwood Park is grazing property with granitic sandy hillside soils running into fertile creek flats. Management of the property has recently changed and the new managers are interested in how the hill side paddocks can be improved. “The paddocks are too wet to get onto in winter and then dry out very quickly in summer”. “There is also a shallow root zone in the soils. It would be great to increase the rooting depth and up the soil carbon”. The trial at Blackwood Park will look at how different treatments to soil affect soil moisture availability and plant growth. Plant composition across the site will also be looked at as part of the trial. To begin the project, Landcare Facilitator Kerri Robson, Agriculture Victoria Land Management Officer Brad Costin and land manager Damien Gerrans looked at the site with respect to soil chemistry, pasture species composition, pasture dry matter. Four trial sites were selected on the property. These are:

The layout of the trial sites can be seen below on the aerial image. 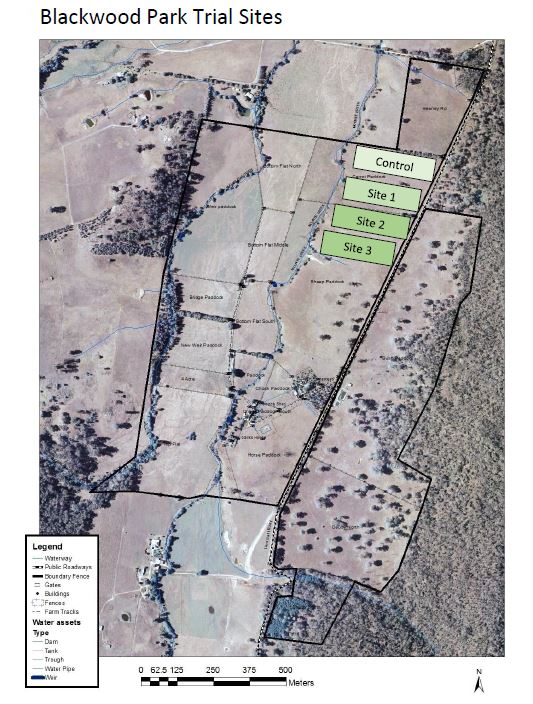 Each of the four trial sites will be subject to the same grazing management. 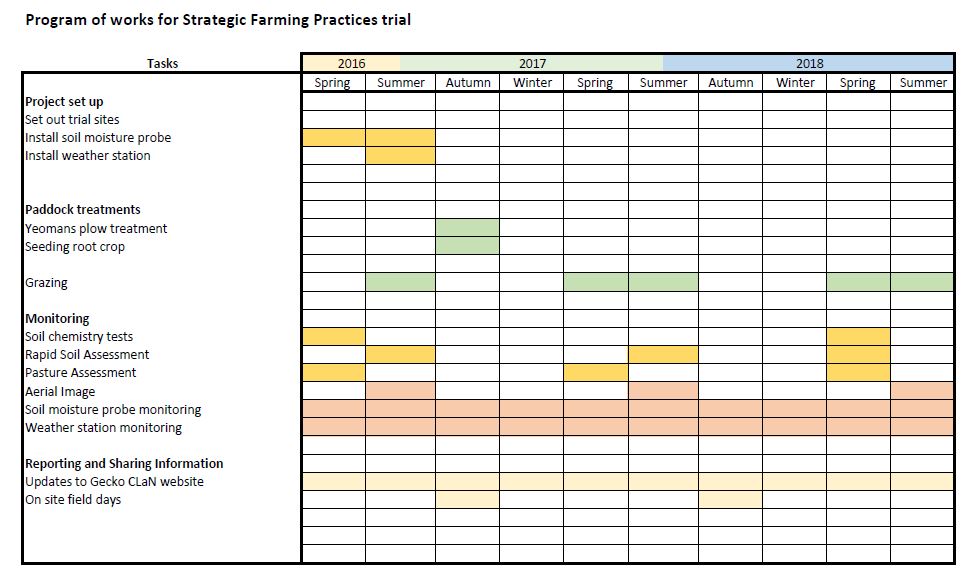 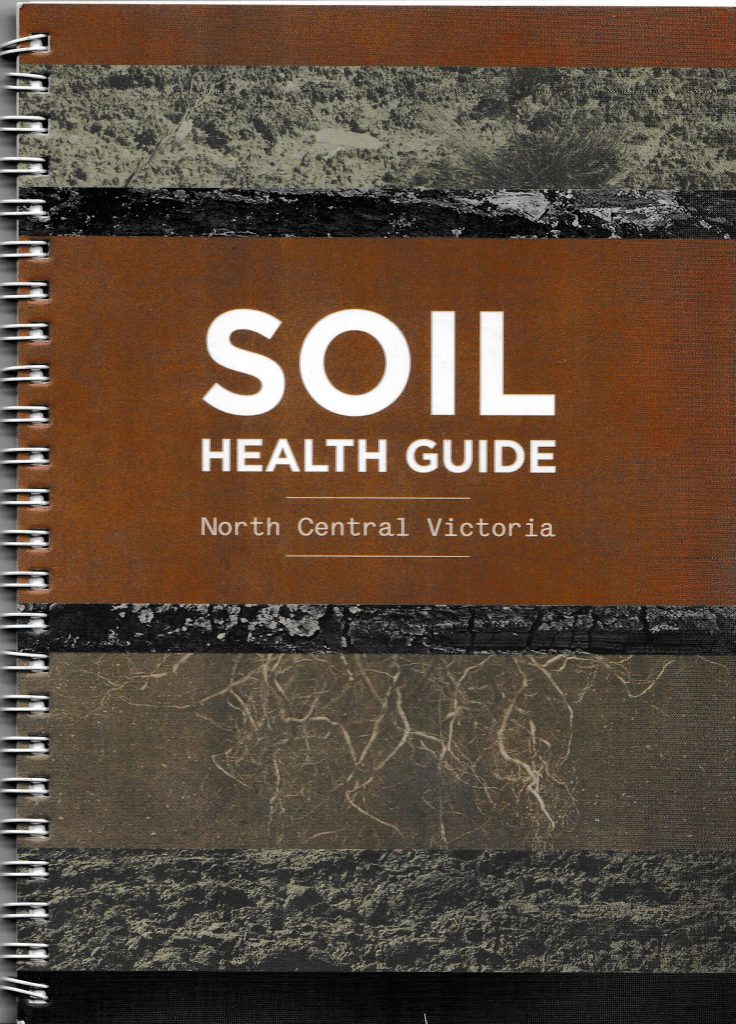 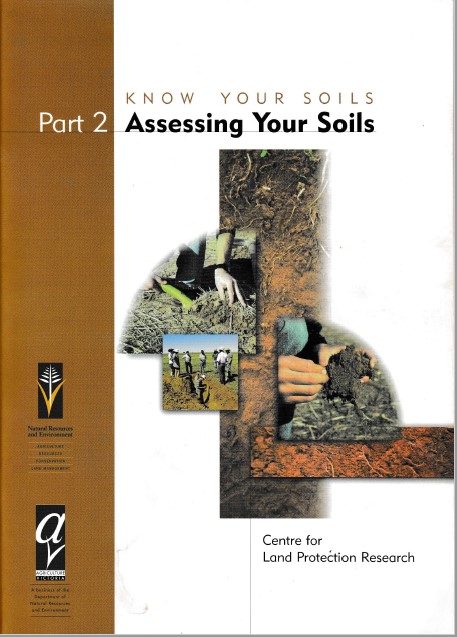 A summary of the results can be found here. Visual soil assessment summary A pasture plate meter and pasture composition tests was conducted in  November 2016 to look at the both the feed quality and quantity within the trial site. Results from the rising plate pasture meter can be found here: Rising Pasture Plate assessment result

Weather data for the site will be collected with an Observant Weather Station. The weather station monitors:

The weather station records the information that can be accessed remotely though the Observant monitoring website.

To view the live weather station data follow these instructions:

You should now see the following page:

If you have any questions about access to this site please contact Kerri Robson at: [email protected] 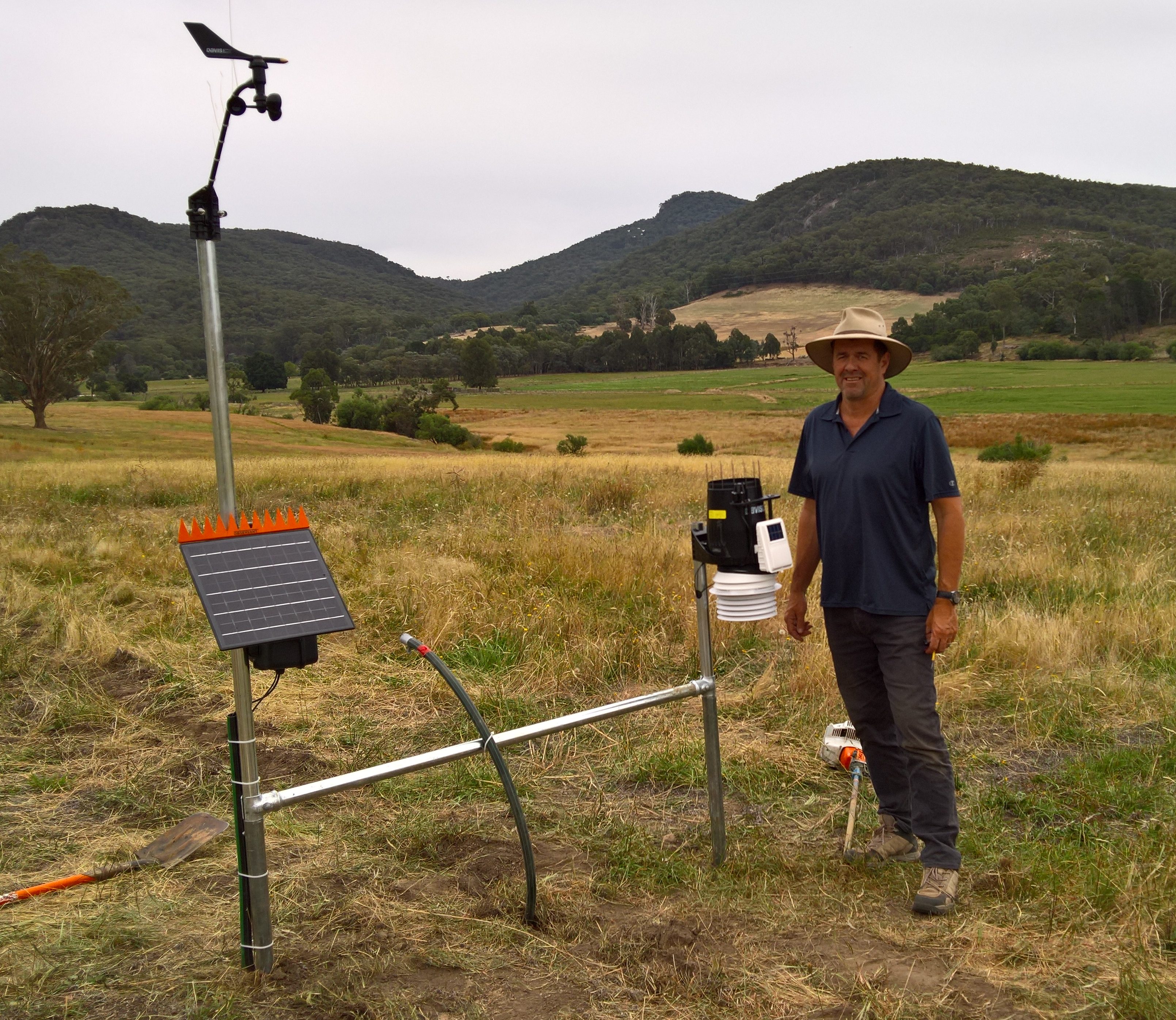 Phil Whitten from Farm Monitoring Solutions who set up the weather station with the newly installed unit. 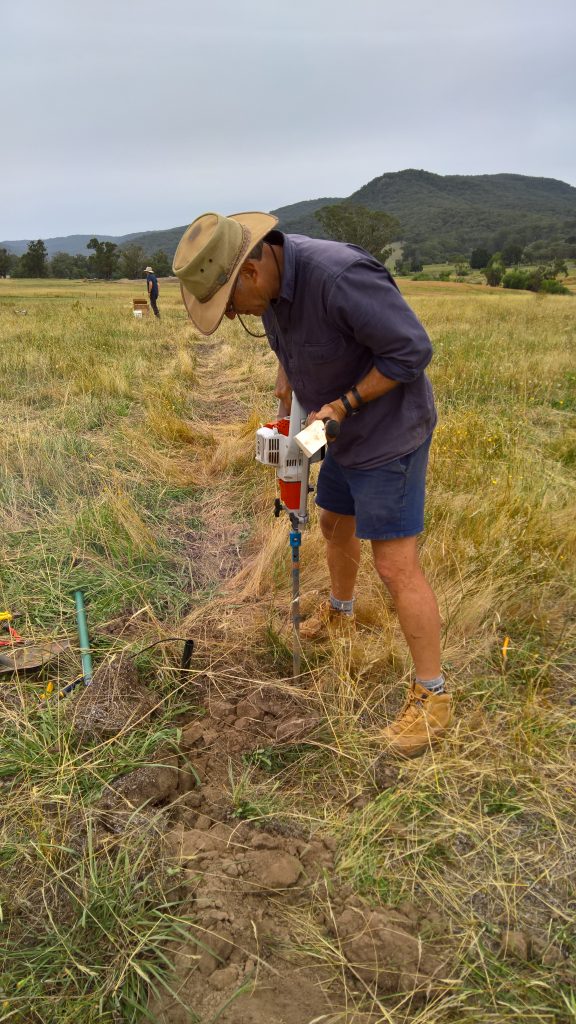 In addition to the weather data, four soil moisture probes will be installed to look at the effectiveness of the treatments.  One probe was installed in the control site.  This was connected to the weather station and has been collecting soil temperature and soil moisture data from 10cm increments to depth of 0.8 m from February 1017. The remaining soil probes will be installed the remainder of the Trial plots in May 2017.

The remaining soil probes will be installed following the Yeomans Plough treatment to ensure that cables and probes are not damaged following their installation. Photo at left: preparation for the soil probe installation. The soil moisture probe will be essential to look at whether the Yeomans plough treatment and the root crop plantings will increase the depth that soil moisture is available to following a rainfall event.

A five tyne Yeomans plough with roller was used on Trial Plot 2 and Trial Plot 3. The two videos below show the Yeomans plough being used on the site.  The keyline was established prior and all ploughing occurred parallel to this.

Keep an eye on the Gecko CLaN website for further updates about the project.  For further information about this project contact Kerri Robson at [email protected]